Redemption of Earth is for sale, that is — the paranormal romance that I usually just refer to as “Daniel,” after the name of the hero. It takes place after the short romance, Reign of Lightning, but you don’t have to have read Lightning to enjoy it. (Doru Walker is my romance pen name.) Continue reading 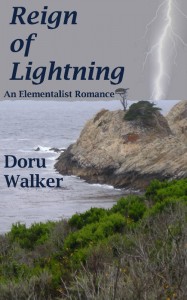 Breathing in the salty air as she watched the waves calmed her. After a few minutes, she turned back to her car. It was time to see what Aunt Cassie wasn’t telling her.
Continue reading