It’s been a while since I’ve done one of these, so I’ll lay down the ground rules for anyone who’s popped in recently without reading the archives (because, really, who would read everything ever written in a blog, no matter how entertaining?). I write a short introduction, then I ask and answer questions related to the topic, generally in the most tongue-in-cheek manner I can manage.

Q: What makes you think people want to read you talking to yourself?

A: They’re on my blog. Also, I tend to get good comments for these posts.

A: I couldn’t think of a topic? Or maybe I was busy. Anyway, I’m doing it now, as I think I mentioned.

Q: How often do you do these?

A: When I remember, once a week — used to be on Fridays. We’ll see if I can get back to that.

Q: Anything else to add?

A: If others have questions, they can leave them in the comments.

Otherwise known as, why quit when you’re behind?

No, really. If you haven’t reached your goal yet, and you quit, you’ll never reach it.

Perseverance is the art of creating a goal and focusing on it — either on the long-term goal or on each step you need to take along the way — until you’ve reached it.

What have you persevered at recently?

Opportunity, we’re told, unlike the postman, only knocks once. There are both truths and fictions inherent in that idea. Anthologies, for example, are a one-shot deal, generally: if you don’t have a story that fits, the deadline passes and with it, the opportunity. Many contests, however, are repeating — quarterly (Writers of the Future) or annually (the Science Fiction at the UPC Award, the Jim Baen Memorial Writing Contest). Submissions in general can be repeated to other magazines, other editors, other agents. Opportunities litter the ground.

On the other hand, when a new opportunity comes up, it’s nice to be able to grab it immediately. When Daily Science Fiction opened to submissions last year, I sent them something the very first day. When Moongypsy Press had their contest to celebrate their first anniversary, I took time out from my other commitments to put together a novel proposal. Both of those actions paid off for me — I sold “Essence of Truth” to Daily Science Fiction, and my proposed novel, Touching Time, won Moongypsy’s contest.

I heard about another potential opportunity recently, and I immediately started brainstorming on how I could address it. I think the window on this chance is a bit wider than for some others — at least, I hope it is. This time, I don’t feel comfortable dropping everything else to the back burner while I take a flyer on something that might not play out. I’ve made commitments, such as finishing Touching Time, and I feel meeting those before I chase the latest opportunity is important.

On the other hand, I am planning ahead, getting things set up so I can grab the opportunity when I can. Given a choice, I grab every opportunity I can.

You didn’t think I’d forget my mantra, did you?

What am I not making excuses for now?

What about reasons, instead of excuses?

Well, the water transmission main that broke this week put a crimp on housework, with dishes and laundry stacking up for an extra day. (That was a little problematic for the boy, who needed a clean pair of sweats for his gym class. I figured a little dirt in the water wouldn’t hurt the wash for those, so he had them, and then they were washed again after the water was clean.)

What about you? What commitments are you holding yourself to?

As always, thanks for reading!

Nectarines. The fruit that most means summer to me, juice dripping down my chin, and none of that fuzziness that can be so irritating with a peach.

Netflix. Wonderful service if you’ve got kids. Being able to stream so many things at a moment’s notice for a monthly fee? And then there’s my husband, who is rewatching several series from when he was growing up. Or the fact that we can now watch the new version of Battlestar Galactica from the beginning.

Nutella. Awesome spread, great on toast or a crêpe, and absolutely delicious stirred into oatmeal. Spreadable chocolate — what more could one want?

If you haven’t already, give them a try.

When I joined GSHW, one of the questions I was asked was, “How many bodies, and where have you hidden them?” My response (I don’t remember whether it actually showed up in the newsletter):

Um, let’s see . . . two with a chainsaw, one was burned to death, I lost track of the knife ones, and there are at least a few with a sword. Some had their hearts ripped out by a werewolf. At least one death by poisoning. Most of a clutch destroyed by a game. Oh, then there’s this planet . . . I kill people a lot. You were talking about fiction, right?

I still haven’t gotten around to killing the planet; that’s an SF novel that’s on the to-do list for some time. On the other hand, I have bumped off a couple more people with blunt objects to the head. That’s all I can think of at the moment.

I’ve maimed some others. Carved things in people’s skin. Taken away people’s memories. Threatened to toss them off flying ships. Being a writer is fun!

Doesn’t matter. I’m having fun writing it. The next time you see me and I have an evil grin on my face, don’t ask why. The odds are good I’m planning another killing.

Every December, Bethlehem has a luminaria night. It’s coordinated by New Bethany Ministries, who sell the sand, votive candles, and paper bags as kits to residents. On the appointed night, people put the bags, weighted down with sand, out on the curb, place candles inside, and light them. We’ve had years where the bags were on top of snow banks and other years when the city hadn’t done leaf collection yet (and I was terrified over what would happen if they caught fire). Sometimes, though, we get a beautiful night, not too cold, and then it’s lovely to walk around the neighborhood and see all the lights.

These pics aren’t from all around the neighborhood, but they’ll give you some idea. 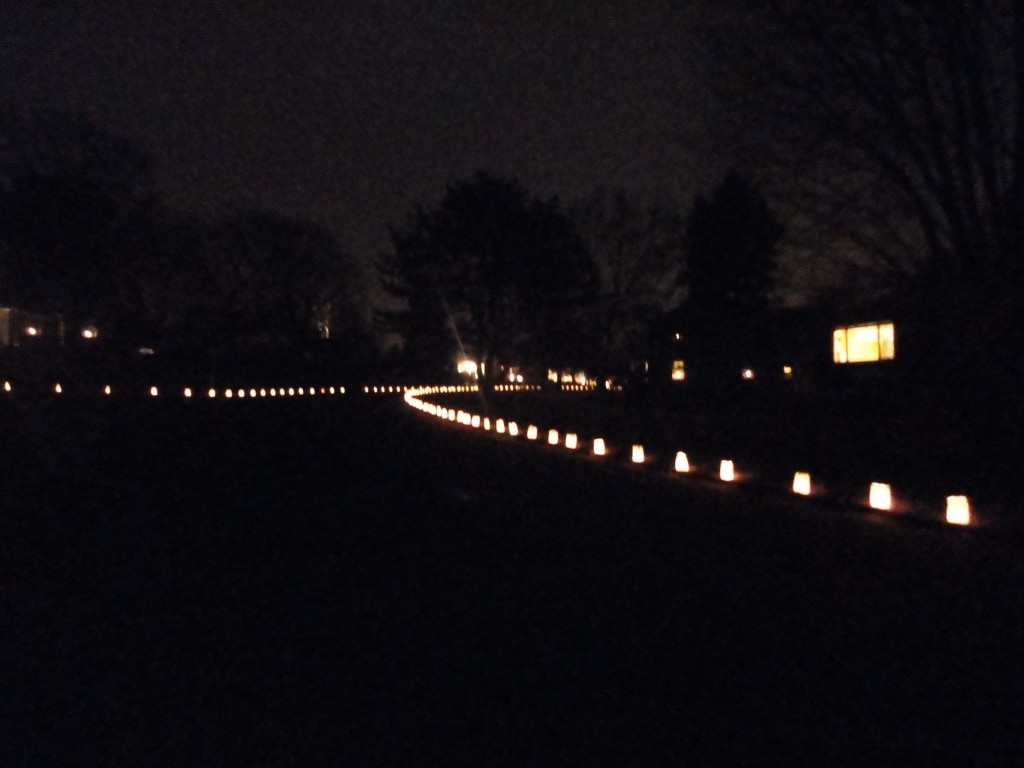 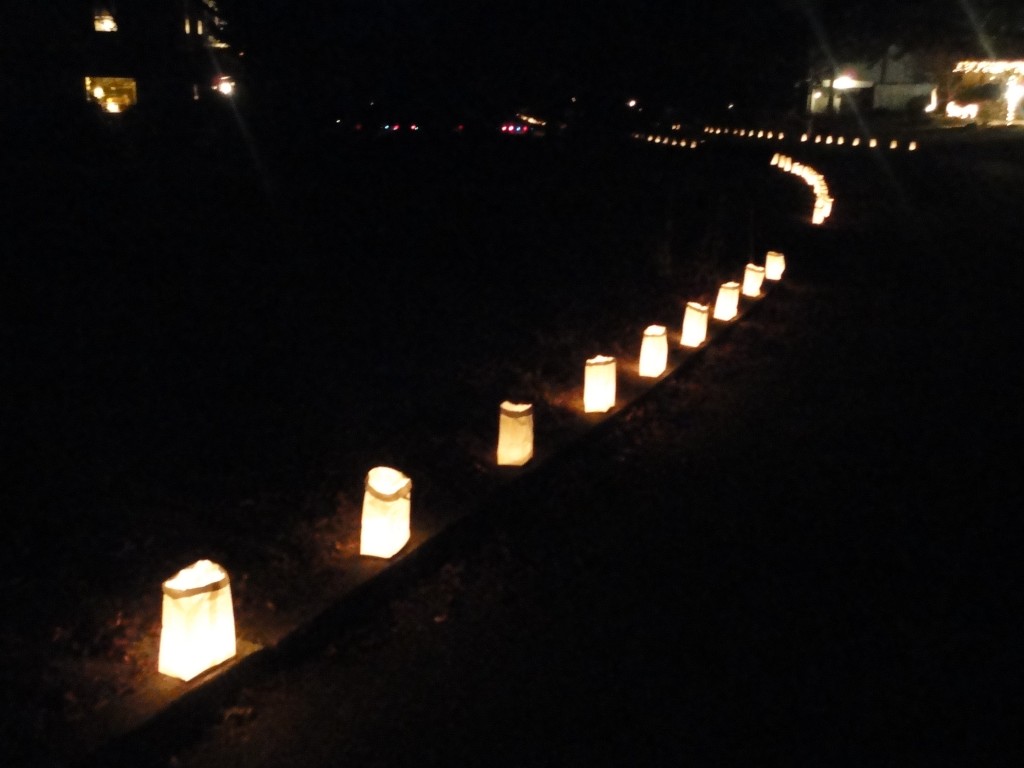 When people think of balance, they often think of a static situation — a pair of scales, equal weights on both sides. Dynamic balance — the kind you need to ride a bike or walk on a tightrope — isn’t usually what people are striving for in their lives. There’s this idea that you can get everything together and cope for once and all with everything you have to do.

There’s the writer — um. Current count of projects on my list for the next couple of months? I’ve got one short story now, but I’m hoping to participate in the Story-a-Day challenge on Forward Motion in May. I’ve got the Mayan book I’m working on for Moongypsy Press, and Daniel’s book (under Doru’s name) that I promised to have up by the end of this month. I have four other books in various states of completion that I want to send out to NY publishers, at least 2 of which I’d like to get done in the next month or two. I have another project, Bridge, which I started this month but really won’t talk about until December or January. I have the steampunk adventure stories. I want to write another novella to submit to the UPC Science-Fiction Award this year. I just got an idea for a new series yesterday, and I was reminded of an old idea for a series that I probably won’t get to before next year. Oh, and then there are the short stories already written that I keep sending out to markets (occasionally selling one), as well as the ones I’m considering putting up for sale.

No balls dropped so far today, but the day is young.

Ah, spring! When a young woman’s thoughts turn lightly to thoughts of piles of receipts and forms to fill out to convince the government that yes, we really did pay our share of the government’s expenses last year. Okay, maybe not so lightly.

I was annoyed when I received the postcard from the IRS saying they weren’t sending forms this year. Our post office doesn’t have them. I didn’t see them at the library. That means downloading them and printing them (No, I’m not doing e-file). I can do that — I’ve often done it for worksheets and forms that weren’t included in the booklet anyway. It’s just annoying, increases the amount of time and energy I have to spend, and makes finding the appropriate instructions, tax tables, etc., frustrating. I like being able to flip through the pages. I like being able to fold pages in half so I can reference pages in two different sections of the book. I like having the paper there as reference when I need it.

In my opinion, a better way for them to have handled it would have been to provide the option to order the booklet sent.

Ah, well. Can’t expect them to actually be helpful, can I? This is the IRS — after all, butt of fear, loathing, and jokes across the country. Okay, back to work on the forms. *sigh*