I uploaded another short story for sale on Friday. “Rise of Kencha” first appeared in Spacesuits and Sixguns, an online magazine that is no longer available. (The Website currently says something’s coming 4th quarter of 2011, in a rebirth of the site, so I check back every now and again to see if there’s anything there yet.) Dave Duggins, the editor, liked my story so much he made it the cover story and commissioned art for it. Happily, Krzysztof Biernacki gave me permission to use the art with the story once again. Below is an excerpt from the opening of the story, as well as the links to buy it, should you be so inclined.

Jani’s been working night shift since she broke up with the commander of her station, Lev Ren, but even with her grief, she notices the problems with engines and airflow on the station. What she doesn’t notice at first is the crew who have altered their bodies, giving up limbs and exoskeleton for machined parts. These crew are playing a game, a deadly game called Kencha. Jani can’t go to her commander, but she can’t let the station be corrupted, either. How she responds will affect everyone on the station. 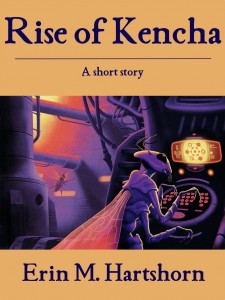 Night shift again. Lev Ren always assigned Jani to night shifts. Just as well—she didn’t want to see him either. The lost eggs hadn’t been her fault, but things were awkward between them now.

A hum vibrated along her thorax; the environmental controls were off-pitch. Her antennae flickered. An oily scent tainted the air, another symptom that something was wrong. The air vents would have to be flushed and the flow recalibrated—there went most of the shift. At least it gave her something to do.

Half the clutch members on night shift spent their time playing “Rise of Kencha.” The game looked interesting enough, for a kill-them-all computer training exercise. But these weren’t hatchlings preparing for space. They had molted from their last instar many flights ago; they should know better.

She thought about the game again when she settled in for her mid-shift break. Very few others were in the room. Cheka rested next to her, tearing a tsill leaf into tiny pieces as though she were nesting again. Not likely. She would have been sent off station before now if that were true; she was too high caste to risk her young here in space.

“Game?” Cheka looked up from her shredded meal and rotated her head to scan the room. “Is that where everyone is?”

Cheka raised her primary wings a span. “I’ve had other things on my mind. What’s this game?”

“The usual.” Jani nibbled on a leaf. “Solve puzzles, kill everything that moves, hoard food and eggs. It’s popular on all the stations right now, I hear.”

“I’m not sure. I didn’t see anyone on day shift playing.” Her underwings rustled. “No one would dare with Lev Ren around.”

Cheka pushed a few pieces of leaf over to her friend. “That plate’s still cracked?”

Jani took the leaves without comment. She should have been off station herself by now. Her brood would have been almost ready to hatch. Now it never would. Once Lev Ren rejected her, the other males had hovered elsewhere. Not that she was interested in the others. With no way to transfer, she was here until her case was used for fertilizer.

“Want to put a little casing down on the semifinals?” The creaky voice of Turl interrupted Jani’s litany of self-pity.

She rotated her head. He smelled oily, his pheromones as dirty as his abdomen. “What semifinals?” No honorifics for this one. How one of so low a caste had managed to get a station post, she didn’t know. Somehow, though, every station had such a one.

“Kencha, of course. I had the great honor of introducing it to the station. My cousin in Sector K sent it to me.” His mandibles clicked, and she turned her head away in distaste. “No? I’ll check back in three shifts.”

“Ttkkk.” Jani pushed her leaves away. “I’ve lost my appetite. I’m going to check on some repairs I did earlier. The subharmonics aren’t right yet.” Not that anyone else would feel the difference.

“You’ll get in trouble one of these shifts, when the supervisors find you’re going by feel rather than using the manuals for calibration specs.” Cheka began shredding Jani’s discarded pile of leaves.

Jani raised her wings briefly. “Not as long as my station-shift has the highest efficiency ratings for the section.” She turned away from the table and the multiplying piles of leaves.

Perhaps she should seek other companionship for her meals. Cheka accepted her, but the other’s brood behaviors grated along Jani’s lower spiracles. Too many reminders.

If that sounds interesting to you and you would like to check out the rest of the story, it’s $1.99 at the usual suspects: Amazon (U.S. U.K. De Fr It Es) — Barnes & Noble — Smashwords