It’s been one of those weeks — actually, it’s been a pretty busy month, with back-to-back proofreading deadlines followed by being sick all of this week (because October and November, I always get attacked by the multi-week cold), plus tons of family stuff to do. (October is the busiest month for my son’s school band.) So I thought I’d just catch you up on a few things today, starting with stuff about my friends. (Or, er, more than a few.)

David Bridger has a new steampunk YA novel out, A Flight of Thieves. It’s a delightful read. (Amazon link)

Margaret McGaffey Fisk has a regency romance out, Beneath the Mask (both e-book and trade paper; Amazon link). Next week, I’ll have a guest post from her.

Dawn Bonanno has two short stories published this month, one in Bards & Sages Quarterly (Kindle link), and the other in Nature magazine’s Futures feature (direct link).

I’ve also been doing other reading, of course.

Every fall, I read Bradbury’s The Halloween Tree to my son. This year, my daughter decided she wanted to listen in, too. She had scary dreams one night from it, but loved the story.

I started Anne Hillerman’s Spider Woman’s Daughter, but I had trouble getting into it. I don’t know whether it was my mood, or what, but I found some of the craft details problematic (paragraphs felt put together in a clunky fashion) and I was irritated by what seemed to me everyone missing the obvious clue at the beginning. That said, from the part I read, it did seem to be a reasonably true continuation of Tony Hillerman’s work, and I would suggest others check it out for themselves rather than taking my word for whether it works or not.

I finished up Seanan McGuire’s Kindle Serial, Indexing. I’ve liked her other work that I read (the Incryptid novels; I haven’t read the October Daye series, and the covers on her Mira Grant stuff scare me), and with the title, it was obvious I was going to check this one out. Kindle Serials, if you haven’t run across them, go on a simple principle: you pay $2 or $3 for a title, and every 2 weeks (on Tuesdays), a new episode comes out, and your Kindle or Kindle app is updated to include the new content. Because it finished up the serialization this week, if you buy it now, you’ll get the whole book. The index in question is an index of fairy tale types, which manifest in the real world. Henry (Henrietta) Marchen is part of the secret agency that keeps them in control so they don’t take over the world. (Henry is also a Snow White — in abeyance — who was born to a Sleeping Beauty.) The ending felt a little rushed to me (it’s possible I just like more dénouement), but every Tuesday the first thing I checked was “Is this an update week, or was that last week?”

Oh! And I fell in love with Maggie Stiefvate’s Raven Cycle books. Only two of the four are out yet, but if you like YA, or Welsh kings in Virginia, or ley lines, or quirky characters (and they are all quirky) who each have their own story, you probably want to check this out.

Just picked up Neil Gaiman’s latest, The Ocean at the End of the Lane, from the library yesterday. I’m anticipating getting it read this weekend around trick-or-treating (the Friday before Halloween in our city), Halloween parades, and other activities.

The best part of today — not going to my daughter’s Halloween parade at school this morning, not that my son wants me to take him to the library to get the book he has on hold before I take him to his friend’s house for a sleepover, not even the trick-or-treating (which is guaranteed to make my feet ache). No, the best part of today is remembering that it marks seventeen years since I met the wonderful man I married. 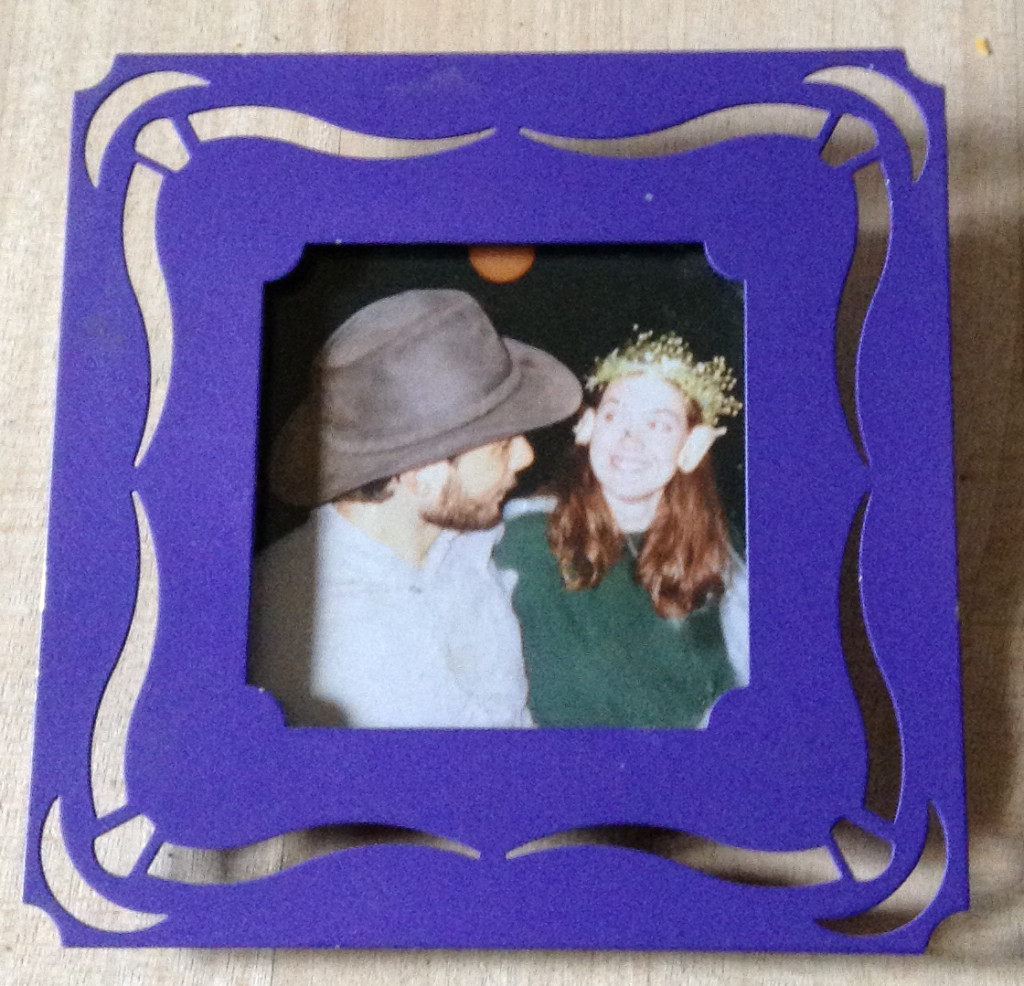 I keep this picture on my desk.