Those who know me know that walking is a biggie. I touch on this on my About Me page. I had a major accident, and as a result, I had to relearn to walk — more than once. Before my accident, I walked everywhere, and afterward, I remember telling my roommate that I resented her put-upon attitude about having to walk four blocks. I was on bed rest at the time and would have given anything to be able to get up and walk.

Now? I don’t walk as much as I used to. Part of that is because, despite the fact that we’re technically within city limits, we might as well be living in the suburbs for how close we are to anything, and there aren’t a lot of sidewalks between here and, for example, the closest supermarket (both Wegmans and Giant are about 2 miles away on busy streets). It’s not like living in Berkeley and popping over to Andronico’s or Berkeley Bowl. I don’t walk because there’s not a lot of places to walk to.

Part of it, though, is habit. Over the years since my accident — especially the years before I got my ankle straightened and fused — I stopped walking. It was painful, it was difficult, and there didn’t seem to be a lot of point. So even though I now can walk, I still haven’t as much as I used to.

Last year, I worked at running again. Even tried to start up again in December, which is a bad time to try to make a new habit with all the calls on my time. I will run again this year — I probably won’t aim for a half marathon, just another 5k in September, most likely, with the goal to finish in less than half and hour this time (cutting my time in half!). On days when I’m not running, though, and to work up to it, I’m going to walk and remember how grateful I am that I can walk, that I still have my own leg, that this is something I enjoy.

I leave you with this video, and the usual question: what are you grateful for this week?

Saturday, we lost power for about half an hour. It was, at worst, an inconvenience that encouraged the boy to go outside and play. Today, the power flickered a few times, and that’s more annoying when it’s a work day and I’m trying to do money-making activities. Still, nothing like the end of October and our several days without power. Continue reading

It’s February. More specifically, it’s President’s Day weekend (I’ll save the rant about remembering when we got two separate days, Lincoln’s birthday and Washington’s birthday), and that means another trip to Boston for Boskone. As this goes live, I’m actually driving home, having attended a wonderful convention:

As with last year’s Boskone, I took my son with me.

I’ll post later in the week with details about some of the panels I attended, snippets of what I learned, and maybe even a photo or two. Right now, though, I’m just grateful that such conventions exist, that I get to go and learn and see friends and make new friends, that my son is interested in going too and spending time with me, and that I’m on my way home now to see my husband & daughter. 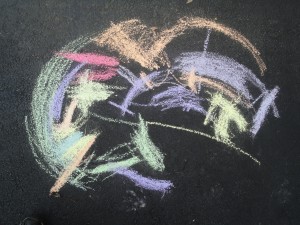 Sidewalk chalk drawing by my daughter

I am grateful for the ability to see. Mind you, it’s been years since I’ve seen clearly without glasses. I’m near-sighted, I have astigmatism, and the eye doctors is really strongly urging me toward bifocals. The fact that there are such things as corrective lenses, eye doctors, and insurance to pay for the lenses? Also a source of gratitude. Continue reading

Your health? Definitely something to be grateful for, and something that only comes up when we’ve been missing it. I’ve been sick with whatever the latest crud is that’s making the rounds: freezing, achey, swollen neck, pressure on the ears, headache, fatigue — general yuck. Which is why I didn’t post yesterday. I was too tired.

(Now the next question: will I pick up some new form of crud next week at Boskone?)

Yes, I’m grateful for chocolate chip cookies. I’m grateful for how easy they are to make, how good they taste (with or without nuts), how much my family appreciates it when I make them. There’s nothing quite like taking a break in the middle of working to have a hot cup of tea and a couple of cookies. Of course, then I have to plan for some exercise to work off those cookies, but that’s okay.

Which means I am grateful that libraries exist, that we support them with taxes (and by attending book sales), and that I often have time to visit and pick up books.

This past week, for example, I went looking for research materials for brainstorming a project. I got books on cadavers, tea, gems, musical instruments, the Silk Road — oh, and a few books off the new fiction shelf as well as a couple of trade comics. Thus, my deep gratitude to them. (As an aside, can someone explain to me why fiction anthologies get shelved as nonfiction?)

I don’t know about you, but my brain just Will. Not. Work. when it’s cold. Not for anything. So today, I am grateful for central heat. (Just as I will undoubtedly be grateful for central air-conditioning come July and August.) It got down to single digits here last night. I know there are people who had it much worse — but I’m glad it wasn’t this cold when we lost our power at the end of October, and I am really grateful for being able to go to bed and wake up to a warm house. I really am spoiled by living in the time and place where I do, where that’s not a major issue.

How about you? What are you grateful for this Monday morning?

Today, I’m grateful for something small — really small. A virus. Sounds like a weird thing to be grateful for, doesn’t it? My daughter’s been coughing and complaining that her ears and throat hurt, so I took her to the doctor this morning. (I’m also grateful that she likes going to the doctor. And that we have insurance.) The diagnosis was just a virus, not strep, no bacterial infection, and no inflammation at all in her ears. Yes, this means a few more days — maybe as much as a week — of her having a sore throat and coughing and being just a bit cranky, but it also means that she’ll be fine.

On a related note: I’m also grateful for VCRs, DVD players, and Netflix. It’s nice to be able to let her chill with preschooler-friendly entertainment when she’s home sick, rather than the game shows and soap operas that were on, say, when my older brother and I spent two weeks home with chicken pox.

I’m looking at today, the first Monday of a brand new year, and thinking about how much I have to be grateful for. Good friends, family, health — obvious, but worth mentioning. As I said in today’s earlier post, I’m particularly grateful to my friend Bonnie who helps me with my writing, but there are many others who have helped me through the years with that and who still help me with motivation, encouragement, and feedback — Dawn, Val, Maripat, Margaret, Elizabeth, Beth, Ed, Marcy, Stuart — on and on. My mom encourages me and believes I can do anything. My brothers both encourage me, albeit occasionally through left-handed compliments. My husband and son, even if they don’t love everything I write, are always excited about my acceptances and try to make allowances for the times I write while the family’s around.

What I’d like to do this year is to have a post every Monday talking about specific things or people I’m grateful for. It’s good to remember all that I already have in my life, and it makes me start the week on a good note. Prepare yourself for 52 weeks of gratitude.

Today: I’m grateful for time with my family. Everyone’s home today for a long New Year’s weekend, and it would be easy to be annoyed that I can’t write and everything as usual because of the activity. Instead, right now the kids are decorating gingerbread houses (geodesic domes). Later, I’m taking the girl to get some new shoes, then off to a playground. Might get in some more D&D with my husband and son later, though that’s iffy, since the boy has to go to school tomorrow. (We’re playing Return to the Temple of Elemental Evil, for those who might be interested.)

Life is good. Time with family is good. And I am grateful that I have it.