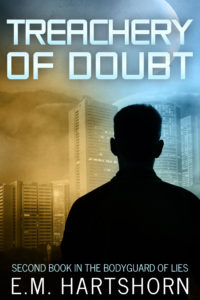 Treachery of Doubt continues the story of Sabra, Gareth, Cinn, and many of the characters first encountered in Bodyguard of Lies, as well as introducing new characters and complications as Sabra tries to get her life back to normal, Gareth tries to figure out what normal should be, and Cinn shows that normal’s what you make it.

Read Treachery of Doubt now, and watch for the upcoming release of the finale for the trilogy!

Sign up for my newsletter to be notified when the third book, Shadows of Truth, is released! You’ll receive updates twice a month, including a newsletter-only serial and recipes:


An excerpt to whet your appetite:

Life was good. Cinn leaned against the wall of the locker room, one leg overhead, stretching her legs. Next to her, Charly kept up a running commentary on the fallout from the recent deaths in the arena. Cinn wasn’t a gladiator by training; she was an undercover district agent, complete with hardwire upgrades and a hell of a cover story.

“Lip and Grunt still want to take Sabra out, of course. They blame her for what happened to Tiger, as if it was Sabra’s fault that Tiger was dealing drugs!”

Cinn grunted. She knew Charly and Sabra had been an item at one point, but she had no insecurities. Quite aside from Sabra having her own relationship, Cinn knew exactly where she stood with Charly.
Behind them, Grunt chimed in. “Hey, fem, she don’t belong down here. She don’t work here anymore, don’t you remember?”

Cinn didn’t bother to answer him.

“Didn’t you hear me?” He grabbed her shoulder and tried to spin her around to face him, which was a stupid move on his part. She whipped her right leg down into the side of his head, knocking him to the ground.

“Hands off unless we’re in the ring, buddy.”

“He’s got a point, though,” another glad chimed in from across the room. “None of us bring our latest conquests down here. This is for employees only. Charly’s not.”

That was true, but Charly had worked here so long that no one thought twice about letting her past checkpoints, and Cinn was reasonably sure that Charly still had all sorts of backdoors into the system that would let her do whatever she wanted. Cinn was very careful not to inquire about such backdoors, as then she might have to turn Charly in.

“You’re just afraid I’m going to tell her all your weak spots,” Charly said. “Like the fact that you’ve had your right arm surgically altered three times, and the muscles don’t work right.”

Snickers around the locker room told Cinn that this was a well-known fact among the other glads. In many ways, Cinn operated at a disadvantage here, coming as she did from out of the city. All the local glads knew each other and had been fighting each other for rankings and popularity for months if not years — well, most of them, anyway, she corrected herself as she caught sight of the aforementioned Sabra and her brother Gareth. They knew each other’s styles, strengths, and weaknesses in a way she never would, even with Charly’s coaching.

“You should go,” Cinn told Charly quietly. “I don’t want you to get in any trouble.”

“You mean you don’t want to get in any, fem,” Grunt said from where he nursed his broken nose on the floor. “But it’s too late for that. You hurt me outside the ring. I’m going to get your ass busted.”
Cinn laughed. “You started it. Ain’t no way I’m the one in trouble.” She nodded up at the cameras in strategic locations. “You think they missed the start?”

“All he did was touch your shoulder.” It was a new voice, cutting in cool and incisively from the doorway, but it chilled Cinn with its familiarity. “You’ll have a hard time proving intent to harm from that.”