This series began with the serialization of the first book, Bodyguard of Lies, here on my blog. It continues in Treachery of Doubt and Shadows of Truth. 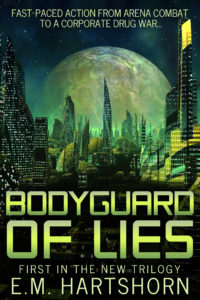 The trilogy follows Sabra, a woman who makes her living as a star of arena combat; her brother Gareth, who opted for mercenary work rather than the arena; and Cinn, a newcomer to the arena who doesn’t want people poking into who she is or where she came from. In a city with rigid hierarchies and privileges, they struggle with grudges, illegal drugs, and masterminds that want to stay hidden.

Read the first book and the second book now, and watch for the upcoming release of the finale for the trilogy!

Sign up for my newsletter to be notified when Shadows of Truth is released! You’ll receive updates twice a month, including a newsletter-only serial and recipes: