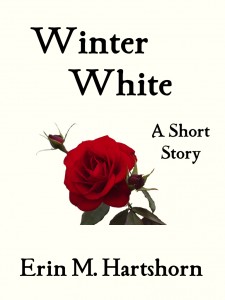 Hvinde’s stepmother truly is the fairest of them all, goddess of beauty and ruler of the kingdom. Her priests, however, think it’s time to give somebody else a chance at the title of fairest, and at least one thinks Hvinde has a shot. What’s a girl to do when she’d much rather play bridge with the guards than primp for others?

As is probably obvious from the blurb above, this is my retelling of the Snow White tale, without hearts cut out, poison, or wicked stepmothers being forced to dance in red hot shoes made of iron. Read an excerpt below.

Hvinde paused to look at the proclamation posted on the wall around the temple. Her stepmother never told her what was going on but always expected her to behave appropriately. It was probably just another silly declaration, like “All maidens shall henceforth wear lilies of the valley until the day of their betrothal.” As if that were going to keep them chaste.

“Be it hereby known . . . ” She skipped ahead a couple lines. ” . . . shall henceforth be new goddess of beauty.” Wait. What? She backed up and read the whole proclamation. She stood and chewed on her lower lip as she thought about it.

Her stepmother, lovely as she was, would be stepping down from her position, as had been decreed by the summit of gods when the first goddess of beauty, Delia, had been crowned with a wreath of roses. The goddess must plant the roses, and she could reign no longer than the resulting bush bloomed. Hvinde’s stepmother, Gloriana, had managed to grow not one but two bushes from her wreath. It had been the subject of many arguments in the temple. The first bush had died last week, and the priests had been arguing behind closed doors ever since. The conservative faction must have won.

Mum was going to be in a snit. She was still the most beautiful woman around, and Hvinde couldn’t imagine Mum bowing to someone else. It was no use Hvinde pretending she hadn’t seen the notice yet, either. Songbirds sang in the nearby branches, and it was well known that they were the goddess’s eyes and ears. Then, too, priests would be out in the courtyard, and they’d be only too happy to tell her what was going on. In fact, here came Yuri.

“Princess Hvinde, so happy to have caught you.” He glanced down at her legs and smiled. Hvinde raised her eyebrows a fraction. It wasn’t as though with Mum and her handmaids he didn’t have enough pulchritude to ogle. He brought his eyes back to her face. “Oh, good. You’ve seen the proclamation. I want to encourage you to come to the temple next week for the judging.”

“I’ll be there with Gloriana, of course.”

“Oh, no, no, no, no. Not as a handmaiden. You should be judged.” The temple bell pealed, and Yuri looked over his shoulder at the entrance doors. No one was there, but he appeared nervous anyway. “Think about it.” He turned and scuttled toward the closed doors.

Just great. As though Mum wasn’t going to be difficult enough to live with, Yuri thought Hvinde should replace her? Not in this reality. Anyway, the goddess of beauty was supposed to be the most beautiful woman in the land, and she hardly qualified. Not with her stepmother around. Hvinde started walking toward her quarters, off to the side of the temple, while thinking about the judgment. Could the panel of judges choose someone who didn’t present herself for consideration? Maybe they could even choose the same person again. It had never happened, but her stepmother had aged rather better than the previous goddesses.

She pushed the doors open and walked inside. Light filtered in through pink wispy curtains. “The color flatters my complexion,” Gloriana said. Strategically placed candles augmented the brightness with their warm glow. The temple servants must have just lit them, as no wax had pooled at the bases of the wicks yet. Mum couldn’t have made her grand entrance for the day.

“There you are, darling.” Her stepmother’s voice behind her surprised Hvinde.

Hvinde turned around to face her. “I didn’t think you’d left the temple yet.” She waved at the candles. “They look as though they’ve only recently been lit.”

Gloriana tossed her long golden hair. “I slipped out early. The servants aren’t expecting me. I needed to find you.” She sat down on a bench cushioned with purple velvet and patted the spot next to her. “Come talk to me.”

She sat down beside her stepmother and curled her legs up under her on the bench. She leaned her head on her stepmother’s shoulder, conscious of the disparity between her own black hair and her stepmother’s more conventional blonde. “I saw the proclamation. Viktor’s side prevailed, I guess.”

Her stepmother smoothed Hvinde’s hair. “I wish you wouldn’t cut this so short. It makes you look like one of the guards.”

“Anyone who thinks I’m one of the guards isn’t paying attention.” She followed the change of subject. When Gloriana was ready to talk about the end of her reign, she would.

“That’s not the point, darling. You’re a princess and will one day be queen. You should dress the part.”

This was one of her stepmother’s standard lectures. Hvinde settled closer, prepared to at least pretend to listen.

“None of us is young forever.” That was new. Hvinde tried to turn to look at her stepmother, but Gloriana pushed Hvinde’s head tight against her shoulder. “Life changes. You’ll be a good queen, but you need a good king. He can ease your mind when life is difficult. He’ll also help to ensure the succession.”

Hvinde blushed. If her stepmother was going to talk about sex, she’d rather not look her in the face. Having lived in a temple dedicated to beauty — but not to love because that was another goddess’s purview — she knew the basics. She didn’t want to know more.

If you’d like to read more, “Winter White” is available at all the usual suspects: Amazon (US, UK, De, Es, Fr, It), Barnes & Noble, and Smashwords.