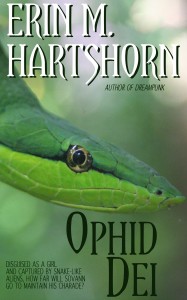 Sovann glanced over his shoulder. The boys were gaining on him. They had longer legs, and it was only a matter of time before they ran him down. He looked to both sides, searching for somewhere to hide, a hole to dive into, a door not quite closed. Nothing. Not even another human face peeking past drawn curtains.

He stumbled, looked back again. Only five now, but Finder gangs always traveled in larger packs than that. Sovann swung his head. Where were the others?

Too late. An arm grabbed his leg, and he fell. He rolled over and stared at the boys gathering around him. The one who’d tripped him stood up and brushed back greasy hair that had fallen into his eyes.

“Good one, Ar,” the gang’s leader said. He wasn’t any taller than the others, but the extra letter on his cheek marked his status–QA893.

The boy next to Ar (R926) looked down and licked his lips. “What we going to do with her?” He blurred the last two almost into a single word. “Been a long time since they let us have any meat.”

Sovann pushed himself back. They’d bought his disguise so far, but it wouldn’t stand up to that.

The leader shoved the speaker away. “You planning on explaining to them why you can’t follow orders?”

The Finders had been ordered out after him? He thought he’d been careful–even faked a tattoo. Boys traveled in packs as Finders, but sometimes girls could be seen alone, doing errands or carrying packages for the snakes. He’d figured that that he’d be safe masquerading as a girl. He’d been wrong. It didn’t matter much now–he’d be taken in for tagging and the truth would come out.

The speaker–L715 by his cheek brand–backed up. “I wouldn’t do nothing permanent like. Maybe just let her have a little taste. Can’t you just feel those lips–?”

“Cut it.” The leader smacked him. “I don’t care if you only wanted to wax your pole while she watched. The snakes said bring girls in, we bring them in.” He waved an electronic box in his hand. “Especially when this says she’s got no real tag. That’s all, nothing else.”

El touched his face with the back of his hand. “I got it, okay? I was just saying.”

“Don’t.” The leader reached down to help Sovann up. Sovann took the offered hand. What choice did he have?

The boys formed a loose cluster around him. El shoved another boy to one side and walked behind Sovann, who shivered. He forced himself to not think about the possibilities. He’d stayed free this long by concentrating on the present. What might happen didn’t matter, only what was happening.

The Finders turned toward the Core, and Sovann couldn’t help being curious. For safety, he’d stayed far away from the snakes; he’d never seen this part of the city.

The streets leading to the Core were just like any others–dusty, full of abandoned cars, occasional trees punching through the old asphalt. Sparrows flitted to land on wires overhead, and voices called to one another behind closed doors.

They rounded a corner and entered a park. It might have been a zoo once; now it was small garden enclosures and broad avenues to walk on, all of them leading to the manufactured hill in the center. It stood devoid of plants, clay-red, sculpted into niches and ledges. The avenue they were on led to a recessed door in the hill. Sovann shivered at the stylized snake over the entrance.

“Better than fine,” the leader said. “The snakes have her now.” He opened the door and motioned Sovann through. “No more running, no more fear.”

Sovann stepped inside. He’d expected the interior to be like the exterior–fake rock, tunnels, a dirt floor. The rounded tunnel was as wide as a street, with two doors to either side, and stairs descending to a longer hallway below. Ceramic tiles stretched across the floor, up the walls, and around to the ceiling, shading from a terra cotta underfoot to a luminous yellow that reflected the incandescent lights above. A faint dry musk lay in the air.

One of the left-hand doors opened. The smell intensified, and a snake walked into the middle of the room. It may have walked like a lizard, but the head was all snake. It blinked, and its tongue flicked out to taste the air.

“We brought one,” the leader said, bowing to the snake. “With no harm to her.”

“So, Qua.” The snake circled Sovann. Its tongue fluttered against his cheek. “Indeed, she is not tagged, despite her attempts at blending in.” It stepped back. “You are dismissed. We will expect another sweep tomorrow.”

The Finders disappeared through one of the doors to the right. Sovann took note of which one; if he were going to escape, that route would not work. Qua paused before following his team. “Did you want me to take her for tagging?”

“That will not be necessary. We have other plans for her.”

Sovann bit the inside of his lip. Humans were radio-tagged and branded whenever they were caught. “What are you going to do to me?”

The snake glided away and down the stairs. Sovann stared after it, then looked back at the door. Could he escape now?

As if it could hear his thoughts, the snake called, “It only opens for the right radio frequency. You have none.”

It might be lying; Sovann tested the door. The handle didn’t turn. He kicked the door in frustration before pivoting back to the tunnel. Sovann inched toward the snake. “What do you want with me?”

If you like what you’ve read and want to see what happens next, you can buy the novelette at the usual suspects: Amazon (US, UK, De, Es, Fr, It), Barnes & Noble, Kobo, and Smashwords.