Then it occurred to me that this is my origin story. I’ve always been writing, and it’s something I’ve cycled back to again and again, in different forms, no matter what had pushed me away. 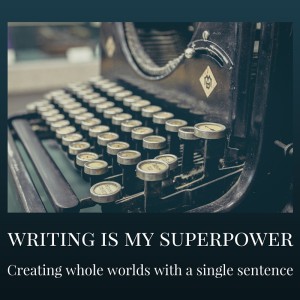 Take that novel in seventh grade, for example. I was trying to write a Regency romance (without knowing anything at all about the Regency period except for what I’d read in Georgette Heyer books) with a suspense plot heavily influenced by Victoria Holt and Helen MacInnes. I didn’t get more than a chapter in, beaten down not only by my friend who told me I shouldn’t use sentence fragments and my dad who said it didn’t matter what I was writing as it was just a fiction that I was writing a book at all, but also because I didn’t know what was going to happen. This should have been my first clue that I am not a discovery writer, but it took me a while to figure that out.

The fanfic didn’t help me with that any, either. It was a complex fanfic, woven together with other friends who loved Star Trek, all of us inserted into the fanfic as the worst of (best of?) Mary Sues. But because it was a collaborative effort and I had to work based off of what they did, it was far closer to improv than to anything with a neat story line and all the ends tied up. Or to one of my serials, like the one I do for my newsletter.

My next attempt at a novel went a little better, although it’s really more of a novella. It was conceived as part one of a novel, and I knew exactly the end point I was aiming at. Of course, I had no idea what happened in the second half of the novel, so that novella sits on my hard drive (having been migrated across several systems — it was originally written in WordPerfect on a DOS system!) never to be shown to the public. Oh, yeah, and its main character was a hopeless Mary Sue, too.

So by that time, I’d figured out that I needed to plan where I was going with a story. I was starting to suspect that I needed a greater breadth in my characters, too. Enter another long hiatus as I went to grad school: I wrote out ideas for stories, even started outlining a novel that had werewolves (I used some of the ideas from this in “Blood Brother”), but I didn’t actually write any fiction until after getting married and moving cross country. Fortunately, with the Internet, I connected with other writers, so I started my long, slow climb out of the hole of mediocrity.

Still not a writing superhero, but I’m getting there.

Today’s post was inspired by the topic “Your origin story” — February’s topic in the Merry-Go-Round Blog Tour — an ongoing tour where you, the reader, travel around the world from author’s blog to author’s blog. We have all sorts of writers at all stages in their writing career, so there’s something for everyone to enjoy. Be sure to check out the next posts in the series, by Sandra Barret, D. M. Bonanno, and Margaret McGaffey Fisk.

If you want to get to know nearly twenty other writers and find out their thoughts on first stories, check out the Merry-Go-Round Blog Tour. You can find links to all of the posts on the tour by checking out the group site. Read and enjoy!