Margaret McGaffey Fisk on Researching Beneath the Mask

As promised, today I have for you a guest post from Margaret McGaffey Fisk, talking about the research she did for Beneath the Mask. If this sounds interesting to you, check out the excerpt she’s posted on her blog and enter to win a copy of the e-book or one of two copies of her fantasy short story. (Deadline is Thursday, October 31!) Thank you, Margaret!

Researching Beneath the Mask 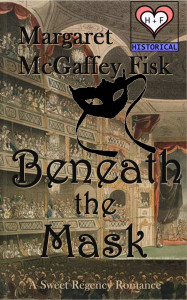 As you write a historical novel, there are endless details to catch you up. The hard part is recognizing which ones require an additional check. The Regency period is not alone in its assumptions handed down by fiction writers extrapolating from what was known at the time, many of which archaeology has since proven false, though this affects the Medieval period more than the Regency. The advantage with Regency is the existence of so many Anglophiles who collect information from disparate sources and put it onto the Web where it’s easy to find. This is grand for the little niggling things that are harder to find in a text (though if you have an interest in the period, whether as a writer or reader, I can recommend What Jane Austen Ate and Charles Dickens Knew by Daniel Pool).

So when Erin asked me for a post on her blog, I thought you might find some of those niggling questions interesting. Here are a few of the points I caught on the edit and had to track down, whether on the Web, or in my research books.

1) Existence of/usage of paper money in the Regency Period.

This turns out to be a complicated question. The existence of paper money as we think of it was not really established, but banks were printing their own (hence the name bank note) that could be turned in for cash. You will not find paper money in Beneath the Mask because making it accurate was much too complicated when I only needed Daphne to hand payment to a hackney driver. That said, I had to research it and make a decision, because otherwise it would stand out poorly.

2) Just when was a pirouette created for dance?

The story is about Daphne’s love for dance and dance performance. I didn’t want to break the illusion by putting in dance moves that were invented even five years later. No, you won’t see Daphne break dancing between these pages, though that might make for a funny time travel novel.

3) On what street/which area did the nobility generally house their mistresses?

You’d think, even in a society where mistresses were common and participated in the upper class culture, that they’d spread the location around, but no. There was a section of London where typically a young man of nobility could find appropriate housing for his lady mistress without raising an eyebrow. This means whom one was bedding had to be common knowledge, or it would make for some comedic moments as young gentlemen left in the wee hours of the morning (often ten a.m. or later) and tried not to see or be seen by the other young gentlemen doing the same.

4) Drury Lane theater (no direct connection to the Muffin Man beyond the snack sellers, but makes me curious as to the nursery rhyme’s deeper meaning).

When I was writing the novel, I often went based on my instincts, having long been a reader both of period novels and historical romance written in this period, but I’d mark things like the theater as questionable. When I researched it, I ended up going with an imaginary theater on the same street as there were several that came and went, but the artwork on the cover is of the Drury Lane theater itself, properly called Theatre Royal, Drury Lane. So in this case, my instincts (subconscious memory) were spot on.

5) Whether sand or blotting paper was in use in the time period.

There is a scene in which this act plays a part. There is a finality to the drying of ink from a fountain pen. Unlike pencils or erasable pens in the 1980s, there is no way to take back an inked line beyond throwing away the page (how wasteful) or scratching it out. I didn’t want people who knew the timing thrown off by whichever direction I went, so searched until I found a timeline answer. It’s amazing what people will focus on, and their very fascination offers a variety of perspectives and some good resources for the avid researcher:
http://www.fountainpennetwork.com/forum/index.php/topic/156685-sand-used-instead-of-blotting-paper/

6) My husband called out the question of whether contractions were in use.

Sure enough, someone has collected them with the respective dates here:
http://www.joannawaugh.com/Expressions.html

Margaret McGaffey Fisk was born overseas during her father’s first full post with the US State Department. She grew up in the diplomatic and ex-pat community, a place of mixed cultures, philosophical discussions, and grand pranksters. Between wild car rides into the desert to climb sand mountains, the discovery of little known archeological sites, and visits to various bazaars and inner cities, she developed a love of culture, language, and the point where these cross over and often clash. Add a theatrical father, largely British teachers, and a return to the United States that was the epitome of culture clash, and Margaret was left with story fodder crossing the genres of science fiction, fantasy, and romance, with a sprinkling of real-world stories as well.

Tagline:
In the flash and glitter of the Regency Era, a young noblewoman craves to dance not in the ballroom but on stage, blending music, movement, and soul. Will these scandalous dreams destroy her family, or gain her a loving patron?

Longer blurb:
Lady Daphne’s duty as daughter to the impoverished Earl of Scarborough is to be chaste and pretty. Instead, she dreams of being a professional dancer at a time when stage performers are considered little better than harlots. Talent and determination compel her, but discovery would cost her the wealthy husband her parents have under negotiation and ruin her family.

Baron Jasper Pendleton has learned love does not exist from suffering his parents’ barely civil marriage. He plans to accept the bride his ambitious mother secured, get her with child, and go his own way, confident there is nothing to be had beyond momentary pleasure. But when a masked dancer’s passion enflames his frozen heart, will he follow convention or risk everything to take a chance on love?