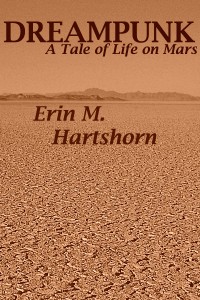 I neglected to post here when I put my novella Dreampunk up for sale last week. I wanted to make sure it had gone in to the extended distribution on Smashwords first. Well, it has. And Alex Fayle posted a marvelous review today on his blog.

Here, somewhat belatedly, is a sample for those interested.

Jesenia Farnham tugged at her corset. She was wearing it looser than fashion dictated, she knew, but her figure looked good enough without boning. Her gold and brown dress fit right in here at Mars Steampunk. The resurgence of steampunk here amused her — Mars was all about creating a new future from a given past. This was only her second convention, and she took some time to look around.

Men strolled by in vests and bowlers or top hats, alongside women dressed in everything from perfect Victorian crinoline to outfits identical to the men’s. Jess had to admit that dressing up was part of the fun as people fell into character as deep as any method actor might. Next time, she would take the time to create one of the eccentric costumes of female aviators or inventors. She wasn’t here today to enjoy the convention, however. She was meeting with one of the men who wanted to destroy her livelihood, and she had to convince him she agreed with his goals.

The boulevard had several large mechanical creations that she couldn’t quite see the details on because of the crowds around them. The objects smelled of gear oil and copper polish, while the crowds smelled like any pack of humans clustered together. One of many changes made to the Victorian aesthetic was the scrupulous cleanliness among the hoi polloi. Not, of course, that anyone here considered themselves anything less than the gentility of the time.

No, not a one was anything but above average. Some things never changed, even if the world itself had.

She glanced upward, noting again the off-color sky punctuated by the floating ozone farms, put in place to create a barrier to the ultraviolet light that flooded the planet. Beyond those, she knew, Phobos and Deimos orbited, their motion visible at a glance, but they were not above the horizon right now. Even with terraforming, Mars would never be Earth, let alone Earth of the past. Which was as it should be.

Jess moved away from the displays in the middle of the boulevard. Her friend Margie was meeting her here — part of Jess’s cover so the Gaia First Foundation didn’t become suspicious of her motives. Margie would be looking at the jewelry tables, if Jess knew her friend.

In fact, she almost missed Margie, one more brown silk-and-leather clad person in the crowd. Jess had been expecting Margie to wear something more flamboyant, more like the red-and-black saloon girl motif she’d worn last time or something with a streak of color, perhaps an orange or purple bodice. Instead, Margie wore a tailored tunic and pants that hugged her slim hips, a bandolier festooned with clockwork scarabs slung across her chest. Her hair was pulled back in a severe bun, and her normally bejeweled ears were bare of adornment. A monocle covered her right eye. Only her voice, raised to haggle with the seller, was as Jess expected.

“Fifteen credits for a pair of goggles that could be off the shelf? I’ll have to add my own enhancements. I’ll give you five.”

Jess sighed and made herself as comfortable as she could off to one side of the traffic. Margie was just getting warmed up, and the seller’s ridiculous claim about being able to see invisible things, as though being invisible were possible, would only make Margie more intent on getting her way.

“Blend in. Be part of the crowd,” Sara, her contact on the train had told her. “Dusty will recognize you, but he won’t come near you if it’s going to attract attention.”

A trio of men walked down the middle of the pedestrian area, shoulder to shoulder and swaggering with the assurance that everyone would know who they were. Or maybe they just knew how good-looking they were — one black, one brown, one white, each would have looked handsome on his own, clad in the mustard brocade and brown velvet they affected. Together, they drew all eyes.

They stopped and looked around as though to assess their audience. The one in the middle, the tallest of the bunch, nodded at the other two, and reached inside his vest. He pulled out a harmonica and put it to his lips. The other two began to dance.

Jess frowned, tilting her head to one side. There was no music, even over her ear implants, yet those nearest to the trio nodded, tapped their feet, or clapped in time to something. Perhaps it was too faint for her ears. She stepped out of the shadow of the table, moving closer.

She had only taken three steps when someone caught her sleeve. She whirled, and the man jumped back, hands raised.

A mask composed entirely of discarded gears and washers covered his face, shading his eyes to the point their color was indistinguishable. A scar ran down the left side of his throat. His face so captivated her attention, Jess barely registered that his clothes were black, with a duster coat that was surely too warm for the day. This must be “Dusty.”

Wordlessly, he held out his hand as though to take hers. However, in his palm sat two ear buds, stylized with gears and etched with aviator wings. Looking at the crowd around her, Jess realized that most of them had similar buds, though she couldn’t tell with those wearing aviator caps. The others presumably didn’t care to listen to the music.

It made sense; no reason to clutter up the public wavenet with all the various bands that must be playing. She wanted to hear this music, too. The trio seemed quite popular. Presumably, these buds also held her instructions — what the GFF wanted her to do, how she could prove she was one of them.

The man waved his empty hand as though brushing her question aside, then grasped her hand and placed the ear buds into her palm. He folded her fingers over them, smiled at her with metal-inlaid teeth, bowed, and walked away. She stared after him, puzzled. All of that fuss about her not standing out, and then Dusty looked like he’d singled her out for no reason? Maybe they really didn’t believe her good intentions.

Dusty vanished into the crowds in the middle of the display area, next to a sign that read “Doctor Emshilling’s Amazing Steam-Powered Velocycle!” — a normal hoverbike decorated to look as though it had a boiler. Or maybe it had a boiler that was non-functional. At any rate, it wasn’t very interesting, and Jess turned away, placing the buds in her ears and facing the musicians.

A voice spoke in her ear. “Accept overlay programming as part of interface?”

Overlay? No one outside Bioengineering was supposed to know that was possible, and only Bioengineering Two had the details on how it was done. From internal memos, she knew that overlays allowed the coder to interact with her city implants, creating a secondary neural interface with other sensory systems. Useful for military applications, and very worrisome if GFF had it.

This would be how her instructions came. She tapped her chin with her finger to speak into her implant. “Agreed.”

For a moment, nothing appeared to happen, but then music flooded through her. The trio was good.

At first, she didn’t notice the visual changes. Everyone still wore the same clothes, the brass shone, the boilers steamed. As she looked past the boulevard, however, she saw traceries of gears and Art Deco styling on the buildings. A hoverbike swooped past, but her eyes insisted that it was a bat-wing glider.

The overlay made the steampunk more real. She didn’t know what that had to do with GFF’s plans, but she’d worry about that later. First, she planned to enjoy the show.
=======
To buy: Amazon (U.S.) Amazon (U.K.) Barnes & Noble Smashwords