It seems like such a large number. Wasn’t it just a little bit ago that we were all worried (or not, depending on our personal feelings) about Y2K? Yet here we are, well into the second decade of the millennium. 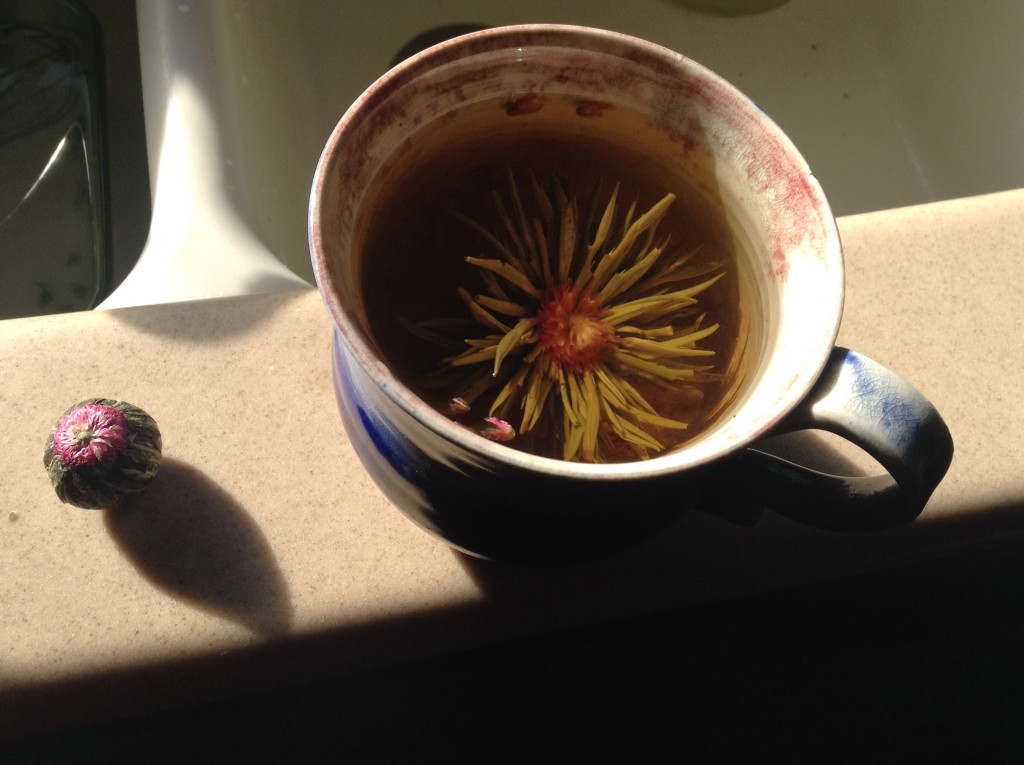 Today’s tea — jasmine globe tea, composed of green tea, jasmine, and amaranth. It unfolds beautifully in the cup, and has a delicate flavor. A perfect contemplative drink for starting the year.

This is going to be a bit of a rambling post, as I’ve several things on my mind.

I will be continuing to do the Merry-Go-Round Blog Tour posts once a month, on the 2nd. This month (tomorrow) will be about my goals and plans for the year.

The Bodyguard of Lies serial will continue posting on Tuesdays until it’s finished (late October, I think), at which point I will put the complete novel up for sale. If there seems to be interest, I will then start posting its sequel.

I used to do gratitude posts on Monday. I’m going to go back to doing that; it’s a nice way to start the week off.

What? That deserves its own spot in my post?

Well, as you may recall, I started off last year by dyeing my hair green. It stayed mostly green through the year, although there was a week or two of teal in there as I switched dyes and worked to get the color right. I’ve also been letting it grow out — it’s just below my shoulders now (like 1/4 inch, so really just below), which is the longest its been in a while.

I haven’t decided what I’m doing with it this year. I’ve considered keeping it green, doing it a different color every month (hey, I can match the holidays!), going with a vibrant fuchsia, putting in rainbow stripes . . . No decision yet.

I like playing with my hair because nothing’s permanent. Hair always grows out, so I can change the color or length (or curl, although I don’t think I’ll ever try a perm again; I’ve never been happy with the results) without any long-term consequences. (Yes, this is one of the fringe benefits of being a freelancer. I don’t have to worry about my employer’s dress code!) So my only limitations are it has to be fun and I have to think it’ll look good. (My daughter might like it if I tried cotton candy pink hair, but that shade would look hideous on me.)

I’m open to suggestions, if anyone has any ideas.

Work’s been quite busy of late. There’s the on-going copyediting gig (civil engineering articles), the book on psychiatry that I’ve been waiting since 2013 to be able to index, and an assortment of …For Dummies titles that I’ve been working on for the past couple of months, and on into this month.

This is, quite frankly, awesome. You might think so much work would mean I’m unable to write, but in fact, it makes it easier. I’m one of those people whose mind spins in circles when stressed — so not being worried about when I’m going to have more work or when the money’s going to show up helps me focus, so I’m actually better able to write (not necessarily write better, although I’m working on it). It also gives a bit more structure to my day and says, “Hey, if you don’t get the writing done now, you’re not going to have time to do it,” which makes me more likely to sit down and write instead of puttering away the day. (This is why, even were I to become a best-selling author, I don’t think I’d give up my freelance work. Structure is my friend.)

Fourth, the theme of the year:

Theme? Well, last year, when I posted about coloring my hair, I half-jokingly talked about turning toward growth. Specifically, I said,

I’ve switched from twilight to growth. Or perhaps I was blooming, and I’ve deadheaded the old blooms to encourage production.

I wrote more about it in my morning pages, about how I wanted to grow in all kinds of ways, as a writer, in my work, as a mom . . . and I think I did pretty well with that as my focus.

I’ve had other themes: 2011 was the year of No Excuses, and in 2012 I did my gratitude posts but also focused on finishing things.

This year is a year for connections. I want to interact more deeply with my readers, which means continuing the newsletter as well as being active on social media and responsive to e-mails, but it also means looking for opportunities to meet new people and forge new bonds. That might even mean I come out of my shell here at home and get more involved in my community (in whatever time I have to do that). I’ll let you all know how it goes in December.

Fifth, my wish for all of you for the new year:

May your year be bright and brimming with hope fulfilled and dreams lived. May your health improve, your joy multiply, and your good intentions prosper. And may 2015 be your best year yet, with each year to come building on it as a foundation.