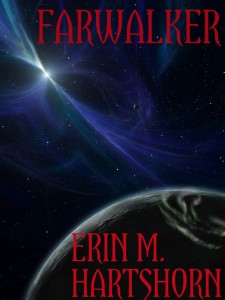 The latest addition to my published stories, Farwalker, isn’t quite as bright and cheerful as most of my work. I think it’s still hopeful as it shows a man struggling to save everybody on his ship, but the story definitely visits some dark spots along the way.

When saboteurs wreck the hydroponics bay of the colony ship Promise, First Captain Djon Farwalker struggles to find a way to keep his crew alive, even if that means taking the long walk out of an airlock to decrease oxygen consumption on-board. His wife challenges him to find another way, tensions heighten, and factions quickly develop, including those who want the colony idea abandoned.

Djon surveyed the damage in the hydroponics lab of the Promise. He didn’t have to be a botanist to recognize the problem–he could barely stand to be in the room, even though the air circulators whined with the effort of bringing normalcy back to the long room. Anywhere else on the ship, the turnover in air supply would have been complete minutes ago, but nowhere else was there this much open space. Even with row after row of stacked white cylinders, most of the bay was empty volume, air that was still almost too hot to breathe. Too hot for many of the plants, too.

On the nearest rack of tiered cylinders, the leafy vegetables appeared to have been steamed as though for dinner, and the peas had dried in place. Even the heat-loving plants in the next row over, like the tomatoes and the taro, slumped over, their leaves curled and darkening in the heat. Djon poked at a tier labeled “heat-tolerant spinach” and pulled his finger back covered with green sludge. Now he knew what was going to be on the menu tonight.

Up and down the rows, plants lay withered. Some looked as though they might survive if the temperature came down soon enough; others weren’t as fortunate. Even of those that lived, though, not all would keep bearing food. That was the curse of annual crops–they got one shot at reproduction. If they missed it because of a frost or a dearth of pollinators (not a problem here where the hydroponics crew tended the plants as necessary) or a heat wave, the plants might still be present, but they wouldn’t yield any food for the crew.

He wondered whether there was enough room in the compost for the dead and dying plants. Not that that was his concern. He might be First Captain, but he knew that his people knew their jobs better than he did. Best to stand back and let them do their work, assume that they would get it done.

The Second Engineer motioned him over to the control panel, and Djon moved along a crossing aisle to meet her, his felted slippers clinging gecko-like to the flooring.

“I can’t reset the temperature properly,” she said as he approached, not giving him a chance to say anything. “The wiring’s fused through here. I can replace the parts, but it’s going to take time.”

“How much time?” a worried voice came over Djon’s shoulder.

Looking back, Djon saw Greenbough Yvan, his cousin and the head of hydroponics. Yvan was a scant three years older than Djon, and there had been resistance in Indigo Wind Clan when Djon had selected him over more experienced candidates. However, Djon wasn’t about to count anybody’s age against them–especially when youth meant more years available to help establish the new colony. The Hierarch had trusted Djon to lead these people to Wachet, their new colony planet–and he knew from long experience that his mother, Hierarch Ndeela, was tougher on him than on anyone else in the clan. If she thought he was ready, he was, even if the politics of their home planet continued to play out both on the ship and in their new colony. In turn, if his age didn’t matter, neither could anyone else’s weigh against their qualifications.

Djon had been about to inquire about what might have caused the fused wiring; it didn’t sound like something that might happen by accident. However, Yvan’s tone was so concerned that Djon let his cousin’s questions take precedence.

“I can’t say,” she replied. “First I’ll have to get this mess out of here without damaging anything else. Since there’s no way I can work in this heat for any significant time, that’s going to take a lot of breaks. The work might take as little as six hours, or it might be days.”

“Do you know how many more of these plants will die in another day? The squash is borderline as it is.”

Djon glanced in the direction Yvan pointed. The large leaves that usually sprawled and threatened to take over the space across the aisle currently flopped atop each other in an astonishing display of enervation. Even though Djon hadn’t been looking forward to weeks of squash three meals a day, the sight disconcerted him.

“I didn’t realize anything could hurt squash,” he said.

“Which is why you’re not in charge of the food supply,” Yvan said.

If you like what you’ve read and want to see what happens next, you can buy the novella at the usual suspects: Amazon (US, UK, De, Es, Fr, It), Barnes & Noble, and Smashwords.