Actually, I rather enjoyed most of the day. Baked. Watched both my husband and son game. Plotted.

By the end of the day, though, I had a terrible headache with eye strain (the new glasses?), and not as much written as I’d planned. Now for eight hours of sleep and doing better tomorrow.

MOOCs (massive open online courses) have great potential. You can find everything from courses in language to psychology, genetics, art, and more. The biggest problem with a MOOC is that the learner has to be massively self-motivated and organized.

I recently finished up a class on Coursera (Imagining Other Earths) that delved into characteristics of planets, how we define habitable planets, and how life on exoplanets might be detected. Except “finished” is probably putting too strong a word on it. I turned in all the written work and engaged in peer evaluation of other papers, but I fell away from watching the videos early on.

I’m currently enrolled in a class on epigenetics, but I haven’t watched any of the videos or done assignments or quizzes. I’ll probably save the videos to watch at my leisure, but mostly, I’m using it as a source for collected information on epigenetics, as the instructor has already assembled a wealth of supporting material.

Another class starts today on diversity of exoplanets. I don’t know yet how much I’m going to participate in it versus just using it to further my understanding of what is already known.

What’s the common thread for these? They’re all topics I’m using to enrich the background of my science fiction. I can deepen my fantasy writing, too; the art & archaeology of ancient Nubia is something I’m watching to see whether it opens up a new course. I might look at Fantasy and Science Fiction: The Human Mind, Our Modern World, too, just out of curiosity.

There’s a lot out there — and this is just one site. If I wanted to learn to code, I’d be all over Codecademy; and Khan Academy I see mentioned most for math, but they have history, biology, computers, and more. And then there’s iTunes University, which has both audio and video courses from many different universities. And MIT and Stanford have their own free online learning. It’s a grand time to want to learn.

Have you done any online courses? If so, what did you think?

Today was the Bethlehem Halloween parade. My son marched in the parade, and my husband drove the support van for the band. Logistically, this required that my husband drop our daughter and me off downtown to amuse ourselves until the parade started.

On the way downtown, the girl was asking how Cinderella’s real mom died, and then how her dad died. I told her the story doesn’t say but that I could pretty easily write a story where the stepmother poisoned everyone — except not Cinderella because the stepmother liked having a servant. (The girl is now referring to this story as basic fact — “in your story.” I guess this means I should start outlining it.)

Then we got to downtown, where as I said, we had to amuse ourselves. Given that the Moravian Book Shop (the world’s oldest bookstore) is there, this was not hard. We looked at books, ate lunch at the cafe, and bought her a small coloring book to amuse her while we waited outside.

I also bought myself an aspirational pin: 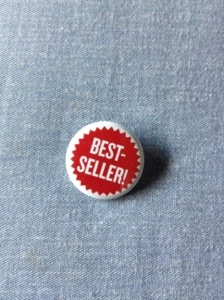 Then we went out and found a tiny unclaimed wedge of sidewalk in front of a pair of parking meters, and the girl settled in to color her ballerinas. I pulled out a notebook and pen and started writing about the discovery of a dead body at a parade. I’m sure it’s just as well that the people around me didn’t know I was sizing them up as potential victims and suspects.

All in all, not a bad afternoon. Few hours of fun with my daughter, a couple of new story ideas, and a pin to remind me of one of my down-the-road goals.

How’s your Sunday afternoon been?

People are gearing up for NaNoWriMo (National Novel Writing Month) once again — the annual challenge to write 50,000 words of fiction in the 30 days of November. (I did a Q&A about it a few years ago.) The local Municipal Liaison (the splendiferous Nicki!) has plot-ins going for people to get their ducks (or albino weasels) in order, e-mails are going out, posts are up on the Forward Motion for Writers forum.

And this year, I’m not participating. Continue reading

Two weeks ago, Alex F. Fayle tagged me with the Next Big Thing meme. I could say that the reason I didn’t post last week is that it was Thanksgiving and I was busy, and there’s some truth to that. Last week was highly family oriented. Another reason is that it’s hard to answer the questions.

This meme prompts writers to talk about what they’re working on at the moment, then tag others to talk about their own work. I have trouble talking about work in progress — often, if I talk too much about the work, I don’t do the work. Then there is the rather startling number of projects I count as in progress now. However, I shall do my best.

What is the working title of your book(s)?

Jack Hawthorne 2 — needs an actual title, but so far it’s just labeled as the second in my middle-grade SF/horror series (also fleshing out the outline here — and for #3 as well)

Sundered Sword — a fantasy set in an alternate Baroque Tuscany (at least I think it’s Baroque, but this might need to be fixed)

Mirei — an interplanetary science fiction novel, currently referred to simply by the name of the first character to show up

For completeness’ sake, I shall include Return of the Albino Weasel — my current NaNo project

Where did the idea come from for the book(s)?

I’ve always loved cozy mysteries, and I think I first tried to write about Greg and Isobel Stone (they were already married in that version) back in 1990 or so.

The paranormal mystery series is founded on a love of elements. Love staring at fire, playing in water, feeling the wind blow about me. I could never pick just one.

Jack Hawthorne is based on loving reading middle-grade and children’s books, both growing up (series like The Three Investigators) and ones I read now with my son (like the Kane Chronicles), but wanting something with a bit more danger in it, albeit B-movie danger, as everyone starts changing into insects.

Sundered Sword started with a random thought from a Monty Python movie. “Strange women lying in ponds distributing swords is no basis for a system of government!” What if that was what determined the ruler, but the sword was broken and there were two legitimate claimants?

Mirei’s story is an on-again, off-again work in progress, one of the few that I haven’t planned out ahead of time. I suppose you could say I was inspired by squids in space.

The albino weasel is a running gag in our NaNoWriMo group. It was a phrase that cropped up at a kick-off party a few years back, a comment uttered into one of those silences that sometimes falls during a party. And we’ve got a great bunch of WriMos who are really entertaining to talk to and have cool and crazy things to say about their lives. So this year, my goal was to just throw all that into a story and see what happened. I’m actually rather bummed I haven’t done more with it.

Will your book(s) be self-published or represented by an agency?

I don’t plan to use an agent, even for those that I may submit to traditional publishers.

Things I know will be self-published: the mystery, the paranormal romance, and the Albino Weasel (assuming I get more written!).

Bonnie R. Schutzman — Born and raised in Montana, Bonnie migrated east for graduate study and wound up staying. She writes vivid characters that I love to hear what happens to. She also golfs, paints, hikes, crochets, and takes time to be with her family. You can find her on her blog, Cowgirl in New England.

Edward Greaves — A New Jersey native, Ed’s the reason I joined the Garden State Horror Writers (soon to be rebranded as the Garden State Speculative Fiction Writers, I believe). He’s had a couple of short stories published, and he’s an associate editor for Space and Time magazine. This year he attended the Viable Paradise workshop. You can find him on his blog, Writing for Beans.

Dawn Bonanno — Dawn is a transplant from Brooklyn to Chicago. She runs, she draws, she spends time with her kids (including working on children’s stories with her daughter), and of course, she writes. She’s been a semi-finalist in the Writers of the Future contest, and she also attended Viable Paradise this year. You can find her on her Website, dmbonanno.com.

When I ran my genre poll a couple of weeks back, I got a request to address space opera. As this is easier than the other subgenres requested (splatterpunk, wuxia, and bizarro), I’m starting here. Oddly enough, I was recently trying to explain to my son what space opera is. First, however, I had to explain both operas and soap operas as concepts. I don’t think I’ll have to do that here. Continue reading

Well, not precisely. A poll implies I’m offering choices. Instead, I’m giving you a “short answer” question. (Or maybe an essay question? No, not necessary, really.)

What genres or subgenres would you like to learn more about?

Could be anything — space opera, soap opera, operetta, Western, adventure fic, sweet romance — just keep it clean. Let me know what you’d like to see talked about, what you don’t see on the shelves, or what you’ve seen that you just don’t get.

Have a great weekend!