My short story, “A New Start,” is now available to purchase at the usual e-book stores for 99 cents. (Note that you do not need an e-reader to read this or my other stories. Kindle has free software available for PC, Mac, iPhone/iPod, and I think Android. Nook also has their program available for those who don’t own a Nook. And Smashwords has HTML, plain text, RTF, PDF, Java, and other formats. So if you’re interested, don’t let the lack of an e-reader stop you!)

When Fainche gets out of her family’s car at a rest stop, she doesn’t expect to come back and find her husband and daughter left without her. Imagine her surprise when she calls on her cell phone and another Fainche answers! She follows them, intent on discovering who the impostor is and how her family was fooled. 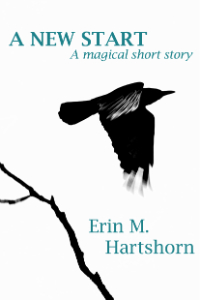 “Pull off at the next rest stop,” Fainche said.

“Geez, Mom.” Bran’s long-suffering voice dripped with impatience. “We’re not that far from Iowa City. Can’t you just hold it?”

Wordlessly, Shane signaled to pull off the Interstate. He never said anything about Bran’s lack of respect, and now wasn’t the time to fight about it.

The car stopped by a pair of garbage cans. Fainche was already halfway out of the car.

“Don’t expect me to come with you,” Bran said, still from her perch in the backseat.

“I don’t expect anything of you.” Fainche refrained from slamming the door. Their old VW really didn’t need the abuse. A crow atop one of the garbage cans raised its wings.

She felt much better when she stepped back out of the building. Maybe she should grab some chips from a vending machine to share — perhaps some Bugles, even if Bran most likely wouldn’t thank her. Fainche glanced toward the VW to judge whether Shane was getting impatient.

Her steps faltered. The car was gone.

The garbage cans still stood there, the lid on one now knocked askew. The bird had evidently flown away, but that had definitely been their parking spot.

She looked up and down the lot for the beat-up Jetta. It wasn’t like Shane to move once he’d parked; he’d better have a good reason.

“Hey, can I get a ride with you?” A man a couple inches shorter than her own five-seven tugged at her arm. Unruly white hair surrounded his wrinkled face. Even though it was midsummer, a faded blue-and-gray striped scarf wrapped around his neck several times.

“Sorry. We have a full car already.” She returned to scanning the lot.

Was he laughing at her? Fainche turned to tell him off, but he’d already moved on to a couple of college-age girls wearing tank tops and shorts. She was a little surprised he hadn’t hit on them first. Maybe he was looking for women traveling alone. Not her problem.

What was her problem was Shane and Bran’s complete disappearance. She reached for her cell to call him and only then realized that she’d left her purse in the car. Mouth pinched tight, she stalked back into the building. The change she’d intended for chips would work for a phone call.

She could never remember Bran’s number, so she dialed Shane’s. His number was only one off from her own.

“Her mother? But–” Fainche didn’t finish her reply. She’d placed the nagging familiarity — the outgoing message on the answering machine at home sounded exactly the same. It was her.

She hung up the phone.